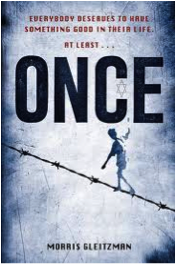 by Morris Gleitzman
163 pages
Reviewed by The Book Dealer

“I don’t know what the rest of my story will be.
It could end in a few minutes, or tomorrow, or next year, or I could be the world’s most famous author in the year 1983, living in a cake shop with a dog called Jumble and my best friend, Zelda.
However my story turns out, I’ll never forget how lucky I am. Barney said everybody deserves to have something good in their life at least once.
I have.
More than once.” (p. 163, Gleitzman)

Once is a book that will stay with you long after you finish it. In this novel, Gleitzman, the author, tries to imagine the unimaginable—life as a Jewish child during the Holocaust. Felix, the main character, escapes reality through writing stories and often sharing them with other kids. His parents have left him in a Catholic Orphanage in order to ensure his safety. Felix is just certain his parents are coming back for him, as at the start of the story he is surprised by a large carrot he finds in his soup, which to him is a sure sign they are on his way.

Each chapter starts the same…”Once I…,” as Felix tells his story in traditional story-telling fashion. Seeing the story through the first naive Felix and feeling heartbreak as he comes to grips with the horrid truth of his situation makes this one of the most riveting and touching stories about this time in history.

This is a novel not only about survival, but also us about a horrid time in history when many community members put their lives in jeopardy to help the Jews. Barney, a dentist who Felix meets on his adventure to find his parents, takes big risks to protect many children by keeping them in hiding.

The most touching aspect of the story is the relationship Felix develops with Zelda, a young girl whose father was a German soldier. After the death of her parents, Felix rescues her and becomes her “family.” I have read many books about the Holocaust, but this one touched me in ways I can’t even adequately put into words. This is a must read; it reminds us about what it means to be human, and what it means to love.

Notes to Teachers: This book is suitable for young readers; though the setting is one of horror, the author has succeeded in maintaining balance between writing in a way that is somewhat protective of young adults without sugarcoating the Holocaust.
Suggestions for Possible Concepts: Struggles and Perseverance; The Holocaust; Family/Relationships; War; Morals/Values; Community.
This book review was authored by The Book Dealer.
Tweet