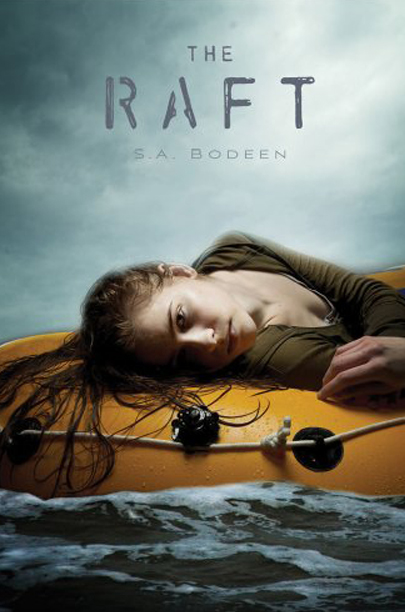 S.A. Bodeen’s third young adult novel, The Raft, opens with Robie, the protagonist, visiting her aunt in Hawaii during one of her many breaks from the small island where Robie lives. Hanging out in Honolulu with her aunt is a far cry from Midway Atoll where her scientist parents work. Naturally, Robie wants to do the normal things (go shopping, tan at the beach, get a piercing, dabble in Henna), and when her aunt has to leave early for work on the mainland, Robie takes advantage. However, after a frightening encounter with a stranger, Robie hops on an earlier supply flight without telling anyone, trying to get back to Midway as fast as possible. Little did she know that this would lead her to an even more frightening experience.

There is significant growth in Robie by the end of her journey. She has to overcome extreme obstacles without any real knowledge on how. Stuck on a raft in the middle of the Pacific Ocean, without water, food, or any way of contacting help, Robie has to rely on herself in order to survive. Through Robie’s character, S.A. Bodeen taps into the human will to survive, and shows the overwhelming difficulty Robie faces with each new struggle. Robie goes from bratty teen to enduring survivor through the course of the book, and in the end her outlook on life, and what it means to live, are forever altered.

However, Robie is not entirely alone during this horrific event, and is in fact saved by the co-pilot of the plane, Max. He pushes Robie out of the plane so that she may survive. Max then pulls her on to the raft, saving her from drowning. The reader does not learn much about Max except what little Robie reads in his journal. Those pieces serve to highlight the struggle Robie goes through by juxtaposing Max’s own struggles. The lack of any other characters for the majority of the book allows the reader to become entirely focused on Robie.

S.A. Bodeen crafts an intensely realistic story, capturing the desperation, terror, and strength that an ordeal like this creates within a human. There is a mix of physical and psychological ordeals, each battering at Robie’s spirit. As Max moves in and out of consciousness, Robie is often left alone with only her terror to keep her company. The resulting psychological tricks are the true terror in the book. Each response comes from a place of honest reaction, and the reader cannot help but pray that Robie survives intact, both bodily and mentally.

Notes to Teachers: Due to the nature of the book, this book would serve high school students the best. While there are not any graphic scenes in terms of violence, the psychological aspects of the crash may resonate too intensely for younger students.
Suggestions for Possible Concepts: Mortality, Personal Limits, and Survival